This time we have Krista and longtime friend of the show Scott Spencer on as a guest host. Today’s episode is VERY video heavy in the show notes, so make sure you take a look. We cover Seth MacFarlane is picked to host the Oscars, Cartoon Network’s 20th Anniversary, Sesame Street keeps being awesome, a couple different official dance music videos and Batman vs Bronies.

First we have the new trailer for the Lone Ranger. I’m not sure what they are really going for on this movie as it looks like it’s Lone Ranger in name only. However, it’s been a huge movie to film in Utah so I’m including it anyway.

Seth MacFarlane was chosen to host the Oscars, which I actually think could be pretty great if he does it right. But he’s a funny video of him telling his dad the good news and not taking it as Seth would have hoped.

Here we have a fun music video from Cartoon Network  celebrating their 20 year anniversary. So far it looks pretty complete, though I notice a few characters missing unless I missed them. Still its kind of a fun tribute.

For some reason (other then being awesome) Sesame Street likes to make fun of Adult TV shows and make them into skits for kids. This time they do it again for Boardwalk Empire. I present Birdwalk Empire.

This really isn’t anything news or media related but here’s a video about the fall of the Dinosaurs with Dominoes. These guys have so much patience.

We have a new trailer for Wreck-It Ralph, which gives us even more info on what looks like a great movie. I will warn you, this is an international trailer so it says that it’s coming out in February but that’s only for international markets.

The new Teenage Mutant Ninja Turtles has finally premiered on Nickelodeon, but now we have a great video introduced by Vanilla Ice but has the Turtles (in suits) and the rest of the staff of Nickelodeon (I believe) doing Gangnam Style. I will say its pretty great. And the video is Krista and Melissa approved.

You guys may be getting tired of Gangnam Style but it’s inspired so many great things. Including the Thai Military which actually made their own version of Gangnam Style at a base. If the military was more like this, I wonder if recruitment might go up.

And this video is kind of a funny video of Batman attacking a Brony, and then having a big reveal at the end. Worth the wait.

Below is a “Trailer” for the next Digimon series – Digimon Fusion (aka Digimon Xros Wars). But as I explained on the podcast, this isn’t a trailer that’s meant for fan consumption. This is just a promo for executives to help sell toys and airtime for television. So take this trailer with a grain of salt.

Also as a request to Scott, he wanted me to make sure I included this picture of King George Washington from Assassin’s Creed III. 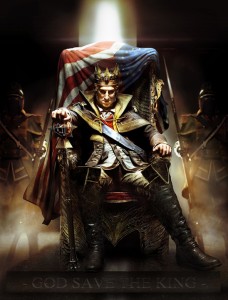 Fox Makes a Monkey Out of Director Matt Reeves

The Munsters Reboot Is Done-sters, But… (UPDATE)

‘Childrens Hospital’ renewed on Adult Swim, ‘Strike Back’ gets Season 3 at Cinemax

Tina Fey to appear with Jimmy Fallon on ‘iCarly’

Inu Yasha: The Final Act coming to DVD and BD in November