We finally have Cori back on the air so that she doesn’t kill Tim Curry. Luckily he’s fine and she stays for half the show. We review Epic and Star Trek, and go over the disappointment of the holiday Box Office. Then we talk about Grumpy Cat getting a movie deal and we have a new promo for the new Tomorrow People series for the CW (while Cori clues us in on her love for the 90s series).

We have the most Epic wedding picture in existence, some great Deadpool videos of him working at the Marvel offices,  more on bringing a Mammoth back to life since it bleeds, a trailer for the new DC animated movie and lastly DC screwing things up again by killing a major character.

First we have another trailer for the new Percy Jackson: Sea of Monsters movie coming out soon and each one looks better and better. I’m hoping this puts the series back on track with the books and so far looks to do so.

Next we have the promo for the new Tomorrow People series that will start on the CW with the new Amell cousin to join the other Amell that’s on the Arrow. It’s a whole takeover!

Not sure I still want Jimmy Fallon to go to the Tonight Show, but if there is one thing that I love that he does, its the skits that he fully commits to with the characters. Below is one mocking the Game of Thrones with Game of Desks. Sadly I think it’s ruined the cameo of Seth Meyers but the rest is fantastic.

I think this is the promo that shows that I really need to watch Psych on USA. Not only have they done the Clue parody and many other and announced that they are going to completely remake one of their own episodes but next season they just announced they are doing a whole musical episode. It won’t come out til December but already it’s got me excited to watch.

I thought that Krista and I did some good pictures for our recent wedding but this is the best wedding photo ever. I’m totally jealous. Can we have a do over? 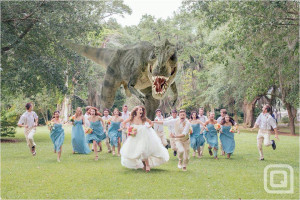 Here at My Geek Confessions we love the series of YouTube videos of How It Should Have Ended and already we have a fairly accurate and fun one for Iron Man 3. (Sadly no cameo from Stan Lee though)

Below are the first two part of what I assume is a new series of live action videos promoting the new Deadpool video game. They feature Deadpool getting a job at Marvel and all the misadventures that they entail.

For better or for worse we are in the middle of the New 52 Universe in Marvel Comics. And now it seems that DC is releasing an animated movie of the DC event that brought us there. I’m curious to see it does tie into the the New 52 or if they change the ending. Especially if some of the stuff that was long term about the 52 is just coming about now.

Lastly we have the release of a brand new Rifftrax and one that you might not expect. Back in the day, there was a terrible Dr. Who and the Daleks movie that had no real relation to the Dr. Who that we know and love today and was actually rather silly. So now it’s so much easier to watch with Rifftrax to add the extra humor to it.

Grumpy Cat Signs Movie Deal, Will Be the Next Garfield

Reason to Hope for Pirates of the Caribbean 5?

Reality TV star to direct Leprechaun reboot, because why the @#$% not

‘Psych’ the Musical promo: Coming this winter to USA

Arnold Schwarzenegger is producing a bodybuilding drama for Showtime

Greatest Wedding Photo In the History of the World

Deadpool gets a lesson in language from Marvel’s Legal department

Uh, DC just randomly killed the hell out of a major character