We’re back with a new episode after taking an unintentional break. We had some car trouble and all the holiday stuff interruptions so real life priorities took precedence. However, the best part is that while we were away nothing much happened! So we have one big episode to catch up.

There were a couple of big deaths sadly, a planned Naked Gun reboot Ed Helms, and Paul Rudd shows that he’s funnier then we thought. In TV news we have news on the Flash, we find out that Better Call Saul will be a prequel but maybe not a straight one, and the beginning and end of a Duck Dynasty dust-up.


Finally in Talk Nerdy to Me, we learn that Cartoon Network and other cancel shows that have too much of female audience, Paul Rudd is cast as Ant-Man, and Sony decides to expand the Amazing Spider-man franchise to include Sinister Six and Venom movies.

It’s an extremely video heavy episode, so we apologize in advance.

Paul Rudd is now Ant-Man and this one video alone has won me over and raised my esteem of him. Over the Paul Rudd’s career, every time he’s appeared on a Conan O’Brian, instead of showing a clip from his next project he shows the same clip from the movie Mac & Me. He even convinces Conan that he won’t show the clip again and then he does it again anyway. The best part of this whole thing is that Paul Rudd isn’t even in the movie. It’s just a random scene!

Transcendence is the new movie starring Johnny Depp as developer of an AI program. When he’s going to die, they decide to download his brain into the AI and he quickly goes out of control and starts to cause chaos.

While we’ve had some of these scenes in the preview a couple of months ago, we now have a full trailer to the Veronica Mars movie. Let us know what you think of the trailer in the comments.

Salem is WGN America’s first scripted TV show and it looks like they’ve poured a lot of the budget into it. It looks like real witches were present during the Salem witch trials and caused all sorts of problems. Its a little too early to tell if the series will be good or if it’s just looks good.

Below is a clip from the single largest prize given away on The Price is Right. The woman had being on the show on her bucket list, but then went on to FREAK OUT. I’m sure she reacted as we all would have.

Kung Fury is actually a Kickstarter that is trying to become a real movie. If it does, it will definitely be one of the most ridiculous movies in existence. A renegade Kung Fu cop from the 80s has to stop another Kung Fu master, Adolf Hitler. He hacks time to take down Hitler and ends up in the Viking age before recruiting them to help him take down Hitler.

Believe it or not, there is a new Powerpuff Girls special coming out later this month. It’s the first time there has been a new Powerpuff Girls since the 2009 10th anniversary special. This one is done in a drastically different style, and made without any input from the original creator since Cartoon Network drove him off.

Even though the first episode is this weekend, here is an English dub trailer for the new anime on Toonami from Funimation, Space Dandy. This is the new show from the creators of Cowboy Bebop and it’s highly anticipated.

Next is the a full trailer for How to Train Your Dragon 2 movie. Looks like Hiccup has grown up quite a bit, and discovers quite a few surprises. Looks rather fun to us.

Here is a fun fan cartoon on if Star Wars was a 1980s anime. While I think the real Star Wars is rather close to this already, the short really puts it over the top.

We love the “What does the Fox say?” song from Ylvis, and apparently so does Cartoon Network Africa (and maybe other countries as well) and they made this music video with Adventure Time. Not the best quality but it’s all that is out there currently. But considering it’s directly parodying the music video, we say that it’s still awesome.

We loved Thor: The Dark World and think that it’s one of the best movies of the year, but even we admit that the guys at How It Should of Ended still make some fun points.

Next up we have two new Honest Trailers, first with Home Alone, and then with Dragonball Evolution with the help of TeamFourStar (who do it in character as their DBZ Abridged counterparts).

The guy in charge of 50% Off, Octopimp, is at it again with another hilarious edition with Nagisa’s Christmas Carols. Gangster Nagisa (tries) to sing all the holiday favorites. I definitely recommend that you give it a listen.

Plus check out this cool live action line up from the Guardians of the Galaxy movie! 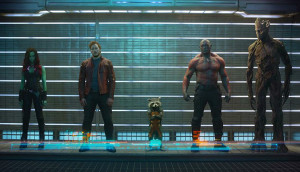 Good News! Batman Vs. Superman gets some help from the writer of Argo

‘How I Met Your Mother’ series finale will air in March

‘Flash’ gets a Ghostbuster? Ernie Hudson may join the ‘Arrow’ spinoff

Miley Cyrus: ‘I’m either boring or I’m a slut,’ she tells Barbara Walters

‘The Americans’ Season 2 gets a premiere date

Bryant Gumbel and Jane Pauley will reunite on ‘Today’

Weinsteins refuse to release Snowpiercer without cuts AND voiceovers

Paul Rudd is the star of Edgar Wright’s Ant-Man, after all

Anna Paquin’s Rogue has been cut from X-Men: Days of Future Past

Why this “Disney Villains: the Next Generation” show is a problem

The Powerpuff Girls get a new look for their upcoming special

Space Dandy proclaims his love for boobies in English-dubbed trailer

The How to Train Your Dragon 2 trailer is beyond epic

Weird Al Yankovic Will Guest-Star on My Little Pony

There’s Hope for Everyone, Folks…