The Forest – After her twin sister goes missing in Japan, Sara goes to Japan to either find her missing sister or find out what truly happened to her before she went missing. Her sister Jess was camping in the renowned Aokigahara Forest at Mount Fuji. The forest is famous for its legends of being a popular destination for those who are suicidal and then disappear without a trace. Warned to stay away from the forest but joined with a friend of her sister’s, an Australian reporter named Aiden, they search for Jess in the forest, a decision that may cost them their lives. Stars Natalie Dormer, Taylor Kinney, Eoin Macken, Stephanie Vogt, Yukiyoshi Ozawa, Rina Takasaki, Noriko Sakura, Yûho Yamashita, and James Owen. Rated PG-13.

Heroes Reborn: Event Series – The “Event” series that brought back Heroes and tried to help revive it after the reputation was damaged after the last time it was canceled. I haven’t seen it but rumors are that this did not succeed in that attempt. Not Rated.

Grace And Frankie: Season 1 – The first season of the Netflix series about two middle aged women whose husbands leave them for each other and now must live together and figure out how to live their lives. The second season will premiere on Netflix in May with a third season already ordered. Not Rated.

Welcome to Sweden: Season 2 – The second season of Welcome to Sweden, starring Amy Pohler’s brother before it was canceled by NBC, about following his girlfriend to a job in Sweden and adjusting to life. Not Rated.

Power Rangers Dino Charge: Resurgence – Last year’s Power Rangers which aired on Nickelodeon and volume 2 of the series. Not Rated.

Justice League vs Teen Titans – The latest DC animated movie, this time the Justice League is possessed by Trigon, and Robin is sent to the Teen Titans to learn teamwork. The saddest part of this is that it’s the wrong Robin since this time it’s Damien but I guess he needs to have his turn. Rated PG-13.

Tonari No Seki-Kun – Tonari no Seki-kun or My Neighbor Seki is based on a manga series but has been turned into a dubbed series by Sentai Filmworks (I’m kind of shocked honestly). Yokoi desperately wants to pay attention in class but the person occupying the desk next to her, Seki, is always up to something strange and inventive while at his desk to distract himself, he can’t help but distract Yokoi, who can’t help but wonder what on Earth he’ll do next. Not Rated.

Gugure Kokkuri-San – A sub only release from Sentai Filmworks about a small strange-eyed girl obsessed (or only eating) with instant ramen that summons the powerful fox spirit Kokkuri-san on accident. He takes pity on her and vows to become her protector even as she attracts other strange character. Not Rated.

Utawarerumono OVA – There’s a little confusion as to when this set was actually released as the link says that it was released April 12th but other sources have it as March 29th. So hopefully it’s released either way at this point. This is a dubbed release from Sentai Filmworks and is a collection of side stories from the rest of the Utawarerumono series. Not Rated. 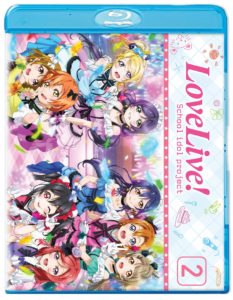 Love Live! School Idol Project: Season 2 – The second season of Love Live! that’s finally been dubbed and comes with a great dub cast. Sadly, it’s a RightStuf/Aniplex exclusive so be prepared to pay for your love. Not Rated.

Dark Souls III – The sequel to Dark Souls II but somehow the fourth game in the franchise. Available for PS4, Xbox One, and PC. Rated M for Mature.

Bravely Second: End Layer – Available April 15, 2016 – The sequel to Bravely Default and is FINALLY coming to the United States after being released in Japan this time last year. Available on 3DS only. Rated T for Teen.