– Muppets Most Wanted seems to be very similar to to the The Great Muppet Caper but with a twist (I think that’s a good thing). After the Muppet movie, the Muppets go on tour around the world. However when the evil Constantine, the world’s biggest criminal and Kermit lookalike, escapes and trades places with Kermit. The Muppets end up helping Constantine commit crimes and Kermit is stuck in jail. We’re really looking forward to the movie and we loved the first one. Almost no Muppet movie can go wrong. And just like all Muppet movies, the movie is full of cameos which would make having the entire cast list on here much too long. Check out our review of the movie. Stars Ricky Gervais, Ty Burrell, and Tina Fey. Rated PG.

– Since they no longer have control of the Scary Movie franchise, the Wayan’s got involved in A Haunted House as a new horror movie spoof franchise. In A Haunted House 2, the main character’s girlfriend is killed in a car crash and he moves on trying to get a fresh start thanks to a new girlfriend and her two kids. But of course things don’t go as well as planned when the new house is haunted and his once dead girlfriend moves in next door. Stars Marlon Wayans, Jaime Pressly, Essence Atkins, Gabriel Iglesias, and Cedric the Entertainer. Rated R.

– A movie starring Tom Hardy (of Inception, Dark Knight Rises) and only Tom Hardy. Ivan Locke is a construction foreman overseeing a huge project but then suddenly receives a phone call that a co-worker he had a one-night stand with is now going into labor. Instead of going home to see his family, he decides to drive to London to be present at the birth. This (and obviously the initial one-night stand) decision starts to completely unravel his life. The movie is filmed in near real time as Locke handles things through phone calls in his car as he’s driving toward London. Stars Tom Hardy. Rated R.

– Starring Nicolas Cage, Rage is the story of Paul, who once lived a life of crime and even stole money from a Russian mob boss almost two decades ago. Taking his share of the money, he goes legit and builds a business in Mobile, Alabama. That is until it looks like his daughter is kidnapped by the Russian mafia, he goes on a rampage to track down his daughter. Not Rated.

– A biopic about Eric Lomax, who was captured during World War II and then forced to work on the Thai-Burma Railway. Even years later, he’s still haunted by his experiences and finds that one of the men that held him is still alive and he sets out to confront him. Stars Colin Firth, Nicole Kidman, Jeremy Irvine, and Stellan Skarsgård. Rated R.

– A Canadian TV series about a female werewolf leaving her clan, despite being one of the few female werewolves. This aired on SyFy channel here in the United States and has been renewed for a second season. It’s not rated but apparently has footage that was trimmed from the broadcast so be prepared. Not Rated.

– The surprise hit for NBC this past year, has ex-government agent and most wanted man Raymond Reddington turn himself in to the FBI to help catch the criminals he was in league with but only if he gets to talk with Elizabeth Keen. She’s a criminal profiler who on her first day on the job. Not Rated.

Power Rangers Megaforce: A Battle to the Finish

– As you can probably guess from the title, this is the last DVD of the Power Rangers Megaforce series. Not Rated. 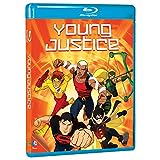 – Even though they aren’t making more and it’s still being handled terribly, but the entire first season of Young Justice is now on Blu-Ray, which is cause enough to celebrate. Probably the best thing to come out of DC Animated in the last few years. Not Rated.

– 8 Disc DVD release of the original Beyblade series that hasn’t been available for years. If you’re a fan definitely one to pick up. Yes this is a show about fighting with tops. Not Rated.

– A sub only release from Sentai Filmworks, A girl finds a deck of cards with 5 magical girls that she can play in different combinations with different Dolls. These Dolls are the only thing that can protect the Earth from an oncoming threat. Not Rated.

From the New World: Collection 2

– A dubbed release from Sentai Filmworks! This is part 2 of From the New World,the remaining characters find out that the conspiracy of Ethics Committee is far darker and more sinister than they imagined. Not Rated.

– The video game Akiba’s Trip by Xseed was directed by former guest Taliesin Jaffe is finally released! In Akihabara, the player strips down vampires to expose them to sunlight. Available on PS3 and PS Vita. Rated M for Mature.

Disgaea 4: A Promise Revisited – The Disgaea 4 game, now on PS Vita. This comes with all DLC available to download as well as some new content for the game. Available for PS Vita only. Rated T for Teen.

– The third game in the series where the Gods have left and humans are left to themselves (I think). Available for PS3 and Xb0x 360. Rated M for Mature.