The Huntsman: Winter’s War – The ill advised prequel AND sequel to the ABSOLUTELY TERRIBLE Snow White and The Huntsman movie. The Huntsman: Winter’s War does have the added benefit of not having Kristen Stewart among the cast and adds Emily Blunt which I think is a much better trade-off. The Huntsman movie confusingly combines Snow White, The Snow Queen, and a bit of Norse mythology (judging by names) to make one big hodgepodge that goes all over the place. Freya, who has the power to control ice and the sister for the evil sorceress Ravenna, retreats to a northern kingdom to raise an army of “Huntsmen” to protect her after her child is murdered. Freya gathers a number of children to train to be her “Huntsmen” and orders them to never fall in love. When Eric (the Huntsman from the first movie, played by Chris Hemsworth) falls in love with fellow huntsman Sara and Freya finds out, she separates them both by ordering Sara to death. The movie skips forwards to 7 years after Snow White and The Huntsman and Freya resurrects Ravenna using the magic mirror. Then Freya discovers what Ravenna has betrayed her and she teams up with Eric and Sara to bring down the evil queen and sorceress Ravenna once again. This version has an extended edition though it is unclear what that even means or why a movie like The Huntsman: Winter’s War even needs an extended edition. Stars Chris Hemsworth, Charlize Theron, Jessica Chastain, Emily Blunt, Nick Frost, Rob Brydon, and Sam Claflin. Rated PG-13.

The Nice Guys – Set in 1977 Los Angeles, a down-on-his-luck (but really seems to be more dumb than anything) private eye teams up with an enforcer type detective that is used to hurting people to get his information. They are hired to track down Amelia after her disappearance and possible murder and discover that the mob is after Amelia and trying to take over territory in Los Angeles to expand its empire. If you’re a fan of Iron Man 3 or Kiss Kiss Bang Bang, you might be a fan of this one since it’s directed by Shane Black as well and seems to have a similar 70s comedy vibe. The Nice Guys also didn’t do as well as would have expected in theaters as well since it came out the same week as Ratchet & Clank. Who knew that Neighbors 2 was competition? Stars Russell Crowe, Ryan Gosling, Angourie Rice, Matt Bomer, Margaret Qualley, Keith David, and Kim Basinger. Rated R.

Ratchet & Clank – Ratchet & Clank is based on the video game series about Ratchet, who is the last of his kind lombax, that partners with a small sentient robot named Clank. Together they find a weapon that has the power to destroy planets and join the Galactic Rangers to prevent the evil Chairman Drek from using the weapon to take over the galaxy. The movie does feature quite a few of the original voice actors from the video game as well as adding several other well-known actors in the mix. Ratchet & Clank didn’t do that great in theaters but I wonder if it is because they waited too long for the property to be made into a movie, much like the Angry Birds movie. Stars James Arnold Taylor, David Kaye, Paul Giamatti, John Goodman, Bella Thorne, Rosario Dawson, Sylvester Stallone, Jim Ward, Armin Shimerman, and Vincent Tong. Rated PG.

There’s a lot of TV releases this week! I’ll add only necessary commentary this week.

Castle: Season 8 – The unexpected final season of Castle after one of the co-stars decided to quit. The ABC made some confusing decisions by publicly saying how they would continue the TV show without her, but then decided to just cancel the series anyway. A shame that another Nathan Fillion series was canceled but at least this one had a good run. Not Rated.

The Walking Dead: Season 6 – The Walking Dead season 6 is probably most well-known for having a terrible ending to the season that made the internet mad. Not Rated.

Narcos: Season 1 – The is the first season of the hit Netflix TV series about the rise of drug lord Pablo Escobar in Columbia finally coming to own on video. Not Rated.

Roots – The History Channel remake of the slavery based miniseries. Not Rated. 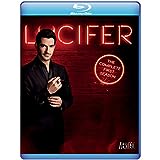 Lucifer: Season 1 – The GOOD DC Comics TV series on FOX (instead of Gotham) about Lucifer, who leaves Hell to open a nightclub in Los Angeles but gets involved in solving police work which he loves. I say that this is the good DC Comics TV series and then they deny the whole thing by putting Vertigo Comics on the cover instead. Not Rated.

Ash vs Evil Dead: Season 1 – The long-awaited sequel series to The Evil Dead and Army of Darkness still starring Bruce Campbell. I haven’t had a chance to watch this yet but I really want to. Not Rated.

DC’s Legends of Tomorrow: Season 1 – One of the good DC Comics series, Legends of Tomorrow is a spin-off of Arrow and Flash but crosses over with both and features characters from both traveling through time! It’s cheesy fun and worth a watch. Not Rated.

DC Super Hero Girls: Hero of the Year – A new movie featuring the new DC Super Hero Girls, where the girls are in high school and have to take on the villain Dark Opal. It seems decent as long as you overlook the cheesy theme song playing in the trailer. Not Rated.

Laughing Under the Clouds: The Complete Series – Another one of the first Broadcast Dubs finally comes to video! Laughing Under The Clouds is based on a manga about the Kumo Brothers that work for the Japanese Government at the start of the Meiji Restoration and are tasked with rounding up criminals and taking them to massive prison in the middle of Lake Biwa. I haven’t had a chance to watch this one yet but I’m super excited to get the chance. Our former guest Terri Doty even stars as one of the main brothers! Not Rated.

The Heroic Legend of Arslan: Season One, Part One – Another of the Broadcast Dubs is finally on video, this one from the second wave and is one of my favorites, with the second season airing right now. The Heroic Legend of Arslan is a strange series if you’ve followed the history of the property. Originally, the series was based on a series of novels that began publishing way back in 1986, was adapted into both a manga series and an anime back in the 1990s, and then was picked up again as a new adaptation in 2013 by Hiromu Arakawa of Fullmetal Alchemist and Silver Spoon fame. Loosely set in the middle east during the year 320, the kingdom of Pars is under attack by the empire of Lusitania. While his father is a tyrant and is captured by the enemy when the capital city of Ecbatana is taken over, the kind Prince Arslan survives and recruits a small team of trusted friends that protect him and try to help him save his country as Arslan wins them all over with his kindness and intelligence. You can read Krista’s review of The Heroic Legend of Arslan for more. Needless to say, for me this has been one of the best new series and is very underrated but it has been very fun to watch as a Broadcast Dub. I’d love a chance to now read the novel series if it was ever translated for a western audience. This set is the first half of the first season with 13 episodes. Not Rated.

Hakuoki: Demon of the Fleeting Blossom: Chapter 2: Warrior Spirit of the Blue Sky – A dubbed release from Sentai Filmworks! This is the second Hakuoki movie where the members of the Shinsengumi fight to survive after being scattered, though it also looks like one of them might have magic or demonic powers. Which slightly confuses me as it’s based on a series of visual novels but I guess that was part of the original story. Not Rated.

Cross Ange: Rondo of Angels and Dragons: Collection 2 – Another dubbed release from Sentai Filmworks with the second half of the controversial Cross Ange anime. Not Rated.

Deus Ex: Mankind Divided – The sequel to Deus Ex: Human Revolution from 2011. The most interesting thing from this sequel is that the boss battles have been changed to a system somewhat like Undertale where you can now win boss battles and the entire game without killing anyone. Available for PS4, Xbox One, and PC. Rated M for Mature.

Madden NFL 17 – The latest version of the Madden Football video game franchise. Available for PS3, PS4, Xbox 360, and Xbox One. Rated E for Everyone.