Birdman – The highly nominated film starring Michael Keaton as a washed up actor who used to play the superhero “Birdman” (mocking Keaton’s own association with Batman) who is starring in a new Broadway play. However, he haunted by visions and the voice of Birdman in his everyday life, while everything goes wrong. Stars Michael Keaton, Zach Galifianakis, Edward Norton, Andrea Riseborough, Amy Ryan, Emma Stone, and Naomi Watts. Rated R.

The Theory of Everything – Another highly nominated biopic about the life of Stephen Hawking during his romance with his wife, his physics and diagnosis of his degenerative disease. Stars Eddie Redmayne and Felicity Jones. Rated PG-13.

The Tale of the Princess Kaguya – The newest Studio Ghibli film but however was not done by Hayao Miyazaki. This is one of the Academy Award nominated animated films and is done in a beautiful watercolor style and tells the Japanese folktale of the Tale of the Bamboo Cutter. This could have gone in several categories but since its up for an Oscar I left it here. Stars Chloë Grace Moretz, Darren Criss, James Caan, Mary Steenburgen, and Lucy Liu. Rated PG.

The Interview – The very dumb movie about assassinating Kim Jong Un that nearly collapsed Sony, caused international tensions and made people think they were patriotic for seeing. Do not see this movie (review is forthcoming.) Stars James Franco and Seth Rogen. Rated R.

St. Vincent – St. Vincent is about a single mother who works long hours that is forced (no word on how he is convinced) to have her son be watched by their eccentric retired neighbor and the unlikely pair bonds. Stars Bill Murray, Melissa McCarthy, Chris O’Dowd, Naomi Watts, Terrance Howard, and Jaeden Lieberher. Rated PG-13.

Most of these are self explanatory. 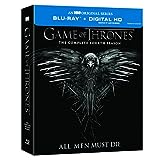 Power Rangers: Super Sentai Zyuranger: The Complete Series – Notable for being the original Japanese series that the first Power Rangers was based on, now available legally in the USA. Not Rated.

Scooby-Doo! – Moon Monster Madness – Somehow Scooby-Doo and the gang go to the dark side of the moon and are attacked by aliens. This is a thing that happened now. Not Rated.

Pokemon the Movie 17: Diancie and the Cocoon of Destruction – The next Pokémon movie that originally aired on Cartoon Network. Not Rated.

Hozuki’s Coolheadedness – Aka Hozuki no Reitetsu is a sub only release from Sentai Filmworks. Hozuki is a demon ogre that works as an assistant to the King of Hell. Not Rated.

One Piece Collection: Box Two – If you’ve been trying to catch up with One Piece this is a great deal for you. The Amazon exclusive has episodes 104 – 205 for about $90. That’s about less than a dollar per episode for this extremely long series. Not Rated.

The Order: 1886 – A Playstation only release about Knights in Victorian London that have to deal with dark forces. Available only on PS4. Rated M for Mature.

Kirby & The Rainbow Curse – Kirby as claymation as an entire game. Not quite sure how that works. Available on Wii U only. Rated E for Everyone.