– This is the movie that has had all the problems with just it’s title, which had to be changed at the last minute. As such even the trailers had to be changed. This based on the true story of a man who worked as a butler at the White House for over thirty years. It also brings back Oprah Winfrey back to a major motion picture. Stars Forest Whitaker, Oprah Winfrey, John Cusack, and David Oyelowo. Rated PG-13.

– A sequel to the 2000 and 2004 movies, Riddick is left for dead on a nearly lifeless planet and has to fight against the natural predators of the planet, while bounty hunters from across the galaxy descend on the planet trying to take him out. This sounds like it’s closer to the first Riddick movie then the second in the series. Stars Vin Diesel, Karl Urban, Katee Sackhoff, and Jordi Mollà. Rated R.

– During a family reunion, a group of ax-wielding murders target them, until they find out that one of the survivors may be more than they bargained for. Strangely enough this movie is already two years old, having premiered at film festivals then. Stars Sharni Vinson, Nicholas Tucci, Wendy Glenn, AJ Bowen, Joe Swanberg, Barbara Crampton, and Rob Moran. Rated R.

Carrie – Carrie is a remake/adaptation of the 1976 film and 1974 novel, supposedly this time closer to the novel. A girl with a super religious mother develops telekinetic powers and uses them to get revenge on those that bullied her. Starts out nice enough but then starts to kill the whole town. Stars Chloë Grace Moretz and Julianne Moore. Rated R.

– I haven’t even seen this movie and I already personally identify with it. Carter is a fairly well adjusted Adult Child of Divorce (aka A.C.O.D.) and has spent the last number of years trying to deal with his parents craziness. When his younger brother is about to get married, Carter must reunite his parents and step-parents, causing even more chaos in everyone’s lives. Stars Adam Scott, Richard Jenkins, Catherine O’Hara, Amy Poehler, Mary Elizabeth Winstead, Clark Duke, Ken Howard, Jessica Alba, and Jane Lynch. Rated R.

– A weird documentary on VHS, as well as the rise of direct-to-video movies. Not Rated. You can get this with a bonus VHS as well.

– A movie based on the true story of a man that was shot in the Fruitvale BART Station in Oakland, California on New Years Eve 2009. Stars Michael B. Jordan, Octavia Spencer, Kevin Durand, Melonie Diaz, and Chad Michael Murray. Rated R.

– The only TV related release this week. It’s the second volume of the Power Rangers: Megaforce season. Not Rated.

– The continuation of the One Piece releases. This covers episodes 313 through 324. One day I’ll actually understand how this series is being released. Not Rated.

– The next set of Naruto Shippuden where the Kage’s all meet to decide to form the Allied Shinobi Forces. This comes out just in time for the series to start airing on Toonami. Not Rated. 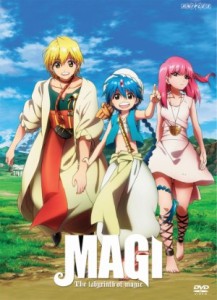 Magi: The Labyrinth of Magic DVD Set 1 – This one isn’t on Amazon, but this is the first set of Magi: The Labyrinth of Magic that’s been airing on Neon Alley. This has been a hit series over in Japan (we saw it all over when we went over there) and is underrated here in the United States. The dub is great and the show is fun. The only drawback is that it’s released by Aniplex, who still doesn’t know their market and makes this set of 12 episodes still $60. However, it does at least come with some high quality postcards. Not Rated.