Kung Fu Panda 3 – We quite liked Kung Fu Panda 3 and if you’re a fan of the franchise, this is definitely one to pick up. After being assigned the role of “Teacher” by Shifu and failing miserably, Po reunites with his long-lost panda father. When the chi stealing Kai returns from the spirit world and proceeds to steal the chi of the kung fu masters, Po travels with his father to the hidden panda village to learn the way to become one with himself, what it’s like to be a panda, and how to use chi to defeat Kai before he wipes out the entire country. Stars Jack Black, Angelina Jolie, Dustin Hoffman, Jackie Chan, Seth Rogen, Lucy Liu, David Cross, Bryan Cranston, Kate Hudson, J.K. Simmons, James Hong, Randall Duk Kim, Steele Gagnon, Barbara Dirikson, Jean-Claude Van Damme, Fred Tatasciore, Stephen Kearin, Al Roker, and Willie Geist. Rated PG.

Whiskey Tango Foxtrot – Whiskey Tango Foxtrot is based on the memoir “The Taliban Shuffle: Strange Days in Afghanistan and Pakistan” by the cable news producer Kim Barker. Wanting something a little different, Kim Barker takes a new assignment to Kabul, Afghanistan in 2002 to cover part of Operation Enduring Freedom. During her time there, Kim makes friends with fellow journalist Tanya Vanderpoel, who helps her adjust to the new lifestyle, and develops a relationship with a Scottish reporter. Amidst all of that and dealing with warlords, fighters, the military, and even partying, Kim Barker tries to discover the key to becoming a successful wartime correspondent. Stars Tina Fey, Margot Robbie, Martin Freeman, Alfred Molina, and Billy Bob Thornton. Rated R.

Adventures In Babysitting – Disney Channel made an unnecessary TV remake of the 80s cult favorite Adventures in Babysitting but with very little in common with the orignal movie. Not Rated.

One Piece: Collection Sixteen – Finally the end of the Thriller Bark arc and onto the Sabaody Archipelago Arc as the Straw Hats fight Celestial Dragons and encounter mermaids in a 24 episode with episodes 373 – 396 ( I have no idea why this trailer’s episode count is off). We’re kind of sad to see the Thriller Bark arc end just because we’ve had a fun time watching it on Toonami! Not Rated.

Selector Spread Wixoss: Season 2 – The second/continuing season of Selector Infected Wixoss where girls battle with a card game for their wishes to come to life, though with terrible consequences. After the first season, Ruko is now on a quest to find her LRIG, her card that was alive in the previous season, and discovers even more terrible things about the Wixoss game. Not Rated.

Yurikuma Arashi: The Complete Series – I’m not even sure how I explain this. The director of Sailor Moon and Revolutionary Girl Utena makes an anime about two girls in love but have to deal with a race of hyper-intelligent man eating bears and one of them vowing revenge on all bears.Yeah it’s weird. The trailer doesn’t help either except I love the part at the end. Not Rated.

Den-Noh Coil: Collection 1 – An English dub from Sentai Filmworks (actually Maiden Japan though not sure if its being released by Maiden just because it’s an older title). But Den-Noh coil takes place in a near future where augmented reality is common place, but after a move to the country, Yuko notices that her new classmates seem to take things a little more seriously with hacking and some major differences in the game. Not Rated. 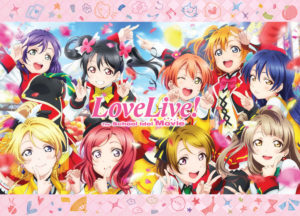 Love Live! The School Idol Movie – The final of Love Live! The girls have one more performance as a group as several of them prepare to graduate but others have plans to break them up before they get a chance to win their last performance. Not Rated.

Zero Time Dilemma – Zero Time Dilemma is final game in the Zero Escape franchise and was brought back from being canceled due to a big fan base despite being a commercial failure, especially in Japan. Now its become one of the biggest releases of the week! The game involves solving several escape room type scenarios in 90 minute intervals. The game somehow takes place between the original Nine Hours, Nine Persons, Nine Doors game and its sequel Virtue’s Last Reward. Available for 3DS, PS Vita, and PC. Rated M for Mature.

Star Ocean: Integrity and Faithlessness – The fifth of the main Star Ocean series, the story actually takes place between the second and third games of the series. The hero lives on an undeveloped world that makes first contact with a space traveling race and gets thrust into an new unknown civilization set some 6,000 light years away from Earth. Available for PS3 (download only it seems) and PS4. Rated T for Teen.