The Hobbit: The Battle of the Five Armies – The Hobbit: The Battle of the Five Armies is the last of the Hobbit movies and marking the last of the JRR Tolkien movies done by Peter Jackson. After the dragon Smaug is chased out of the Lonely Mountain, Bilbo and the dwarves must defend the mountain as the five separate armies descend to battle over each other. Meanwhile, Thorin starts to succumb to the same madness from the mass of treasure that his father had. Stars Ian McKellen, Martin Freeman, Richard Armitage, Evangeline Lilly, Lee Pace, Luke Evans, Benedict Cumberbatch, Ken Stott, James Nesbitt, Cate Blanchett, Ian Holm, Christopher Lee, Hugo Weaving, and Orlando Bloom. Rated PG-13.

Into the Woods – Into the Woods is the Disney movie version of the 1987 Broadway musical that combines various fairy tales with more adult themes. Cinderella, Red Riding Hood, Jack and Beanstalk, Rapunzel, and many more all meet up in a large forest as they try to have their wishes come true. This version has been edited a bit for content and time so it’s not an exact version of the musical and for some reason does feature a zoot suit Johnny Depp as the Big Bad Wolf but only for five minutes. But the production values and the singing look great and definitely one that you should check out this week. This musical helped to start the darker retellings of the fairy tales that we now have today. Stars Meryl Streep, Emily Blunt, James Corden, Anna Kendrick, Chris Pine, Tracey Ullman, Christine Baranski, Lilla Crawford, MacKenzie Mauzy, Daniel Huttlestone, and Johnny Depp. Rated PG.

Unbroken – The newest film directed by Angelina Jolie is Unbroken. The film centers on Louis Zamperini, a U.S. Olympic Runner who was shot down during World War II and rescued by the Japanese only to spend years in harsh Japanese prisoner of war camp where he was treated cruelly until the end of the war when’s he’s set free. The film is based on the real life of Louis Zamperini and the 2010 book Unbroken: A World War II Story of Survival, Resilience, and Redemption. Stars Jack O’Connell, Garrett Hedlund, Domhnall Gleeson, Jai Courtney, Alex Russell, Miyavi, and Finn Wittrock. Rated PG-13.

Mystery Science Theater 3000: XXXII – The 32nd release of MST3K on DVD with 8 hours of content with the titles of Space Travelers, Hercules, Radar Secret Service, and San Francisco International included inside. Not Rated.

Monster High: Haunted – When one of the Monster High girls starts to be haunted, they travel to a parallel ghost world and even become ghosts to be able to blend in at an all ghost school and solve why one of them is being haunted. Not Rated.

Pokémon: Black and White – Adventures in Unova and Beyond Set 2 – The next set of Pokemon as Ash adventures in the Unova region. The set comes with 3 discs so you get a pretty good number of episodes for the price. Though it does sound like this is quite a bit behind the television broadcast. Not Rated.

Student Council’s Discretion – A sub only release from Sentai Filmworks. At a school whose student council is mostly voted so are the most popular and beautiful girls are voted in alongside one male that gets in based on academic achievement. He’s tasked with recording the achievements of the student council but tends to mix reality with fantasy since he’s a dating sim addict. Not Rated.

Place to Place: Complete Collection – Another sub only release from Sentai Filmworks. A pair of good friends that aren’t quite a couple have a complicated relationship and must figure out their status. Not Rated.

Bokurano Complete Series – A sub only release but this time from Discotek Media. A slightly older series about a group of middle school students that pilot a robot against enemies from other dimensions but the pilot dies every time. So basically every episode someone dies…which doesn’t sound all that fun. Not Rated.

Bloodborne – From the same team that developed Dark Souls, Bloodborne takes place in the ruined gothic city of Yharnam. In search for a medical remedy, a pilgrim discovers that the city of Yharnam is overrun by people turned into monsters thanks to a strange illness. Available for PS4 only. Rated M for Mature. 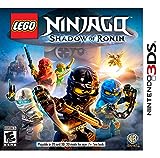 LEGO Ninjago: Shadow of Ronin – The newest LEGO Ninjago game where the evil Ronin and his shadow army steal the ninjas’ powers and memories. They must train to regain their powers as they go up again Ronin and his minions. The only sad part of the game is that it doesn’t have the same voices as the television series. Available for PS Vita and 3DS. Rated E for Everyone 10 and Up.