Pride and Prejudice and Zombies – Pride and Prejudice and Zombies is a mashup of Jane Austen’s Pride and Prejudice and the existence of zombies and was actually a movie that I rather enjoyed. Originally a book released in 2009, the mashup has a mysterious plague that has overtaken England (the world?). After a failed attempt to protect London from the zombie horde, but feeling that with training people can return to the countryside, people try to attempt a normal life. The Bennet sisters are still trying to find someone to wed and take care of them and this time Mr. Darcy is a Lieutenant in the army and renowned for his expertise in killing zombies. While the much of the story is the same as Pride and Prejudice, the story diverges a bit more toward the end as the zombies band together once it’s discovered that as long as they don’t partake of human brains that they can retain some higher brain function after their deaths. Pride and Prejudice and Zombies is billed as a horror comedy but thankfully it’s nothing like the Abraham Lincoln: Vampire Hunter (which was all sorts of ridiculous) but instead played straight like it is supposed to be. Stars Lily James, Sam Riley, Jack Huston, Bella Heathcote, Douglas Booth, Matt Smith, Charles Dance, Lena Headey, Suki Waterhouse, Emma Greenwell, Dolly Wells, Tom Lorcan, Ellie Bamber, Millie Brady, Sally Phillips, and Jess Radomska. Rated PG-13.

Gods Of Egypt – The movie most famous for its whitewashing and the director apologizing for the film before it even opened and then bombing at the box office, Gods of Egypt is vaguely based on the Egyptian Myth of the battle between Set and Horus. Set overthrows Horus and steals his eyes and sends him to the Afterlife. A mortal, Bek, in an effort to rescue his dead true love, rescues Horus and battle their way to Set to reclaim the kingdom and bring prosperity back to Egypt. Stars Nikolaj Coster-Waldau, Brenton Thwaites, Chadwick Boseman, Elodie Yung, Courtney Eaton, Rufus Sewell, Gerard Butler, and Geoffrey Rush. Rated PG-13.

Triple 9 – Triple 9 is about a group of the thieves including crooked police officers pull off a bank robbery for the Russian mafia. When they aren’t satisfied with the results, they are forced to attempt another heist. In order to distract the police long enough for their latest robbery, they must create a code “Triple 9” (999) or officer down in the line of duty. One of the crooked cops’ new partner is selected to take the fall but ends up thwarting their plans causing all of their plans to become undone. Stars Casey Affleck, Chiwetel Ejiofor, Anthony Mackie, Aaron Paul, Clifton Collins, Jr., Norman Reedus, Teresa Palmer, Michael K. Williams, Gal Gadot, Woody Harrelson, and Kate Winslet. Rated R.

Suits: Season 5 – The fifth season of Suits, the USA legal drama about a college drop out the works at a law firm and uses his photographic memory to help win cases. Suits’ sixth season begins this July. Not Rated.

Togetherness: Season 2 – The second and final season of the HBO dramedy. Not Rated.

Teen Titans Go!: Season 3, Part 1: Eat, Dance, Punch! – Eat, Dance, Punch! features the first half of season 3 with 26 episodes, though don’t be fooled – these are 26 half episodes so more like 13 episodes worth of content. It does have two discs and has episodes where the Teen Titans go back to school, Robin cooking, and Beast Boy finding the Tooth Fairy’s money. Not Rated.

One Piece: Season 8 – Voyage One – This set has episodes 457 – 468, as Luffy and the gang escape the prison Impel Down and arrives to try to stop Ace’s execution with only hours to spare but is blocked at the gates. Now he must fight his way through with enough time to save his brother. ACE!!!! Not Rated.

Log Horizon 2: Collection 1 – A dubbed release from Sentai Filmworks! This is the first 13 episodes of season 2 of Log Horizon. It’s now been 6 months since the event that trapped everyone in the online game but still in Akihabara but as things become harder for them to keep the city running with their new surroundings, they must decide on if the city should be abandoned or if they should continue to listen to their new leaders that have helped them keep the peace up to this point. Not Rated.

When They Cry: Kai: Season 2 – A sub only release of season two of When They Cry: Kai. The strange occurrences seem to continue to plague the city and more people keep dying. Not sure about too much else sadly! Not Rated. 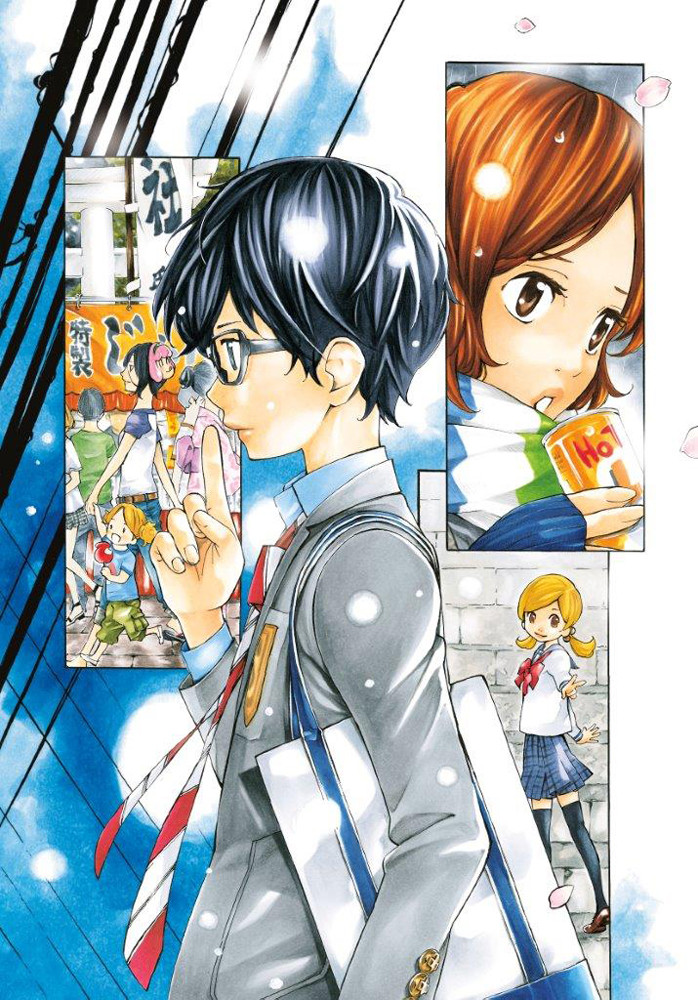 Your Lie in April: Volume 2 – The second volume of this RightStuf/Aniplex exclusive title (though it is already available on Netflix). Kousei has been able to play piano again and tries to use his performance to reach Kaori, who keeps having to spend more and more time in the hospital. Not Rated.

Saekano: How to Raise a Boring Girlfriend: Volume 2 – The quest to make the perfect girl in a video game continues as they now try to find someone to do the music for the game. This sub only set contains episode 6 – 12 of the series.