Now You See Me 2 – Now You See Me 2 is the sequel to 2013’s Now You See Me and has the Four Horseman magicians return after being blackmailed by a tech superstar into stealing a powerful chip that would allow the owner to be able to crack into any computer system. At the same time, their new leader Dylan Rhodes continues to try to get his revenge on the person is responsible for the murder of his father. We really enjoyed first movie and were surprised that we did like Now You See Me 2 but with a few caveats though with some fun new changes. Stars Jesse Eisenberg, Mark Ruffalo, Woody Harrelson, Dave Franco, Daniel Radcliffe, Lizzy Caplan, Jay Chou, Sanaa Lathan, Michael Caine, and Morgan Freeman. Rated PG-13.

Check out Krista’s review of Now You See Me 2!

Krista’s Korner – Now You See Me 2

Money Monster – George Clooney stars as Lee Gates, a Jim Cramer type Wall Street guru and host of the “Money Monster” financial program. During a live broadcast, an investor who lost his life savings following a tip from Lee Gates sneaks in to the studio and takes Lee Gates hostage and forces him to wear a vest rigged with explosives. Staying on the air, Lee tries to figure out what happened with his captor’s investment along with Lee’s producer who is trying to dig for evidence while keeping the show on the air. During the investigation, they discover a trading glitch that may be more than what it seems. Stars George Clooney, Julia Roberts, Jack O’Connell, Dominic West, Caitriona Balfe, and Giancarlo Esposito. Rated R.

The Darkness – Supposedly “Based on a true story”, a family visits the Grand Canyon and their son brings home black rocks that invite old Indian spirits into the house that feed off of fear. As their son’s behavior gets worse and worse, the spirits grow stronger and the family must purge the house of the spirits before it’s too late. The bright spot in this is the decent cast including a small part by Ming-Na Wen, who plays Agent May and Mulan. Stars Kevin Bacon, Radha Mitchell, Lucy Fry, David Mazouz, Ming-Na Wen, and Paul Reiser. Directed by Greg McLean. Rated PG-13.

All the Way – This one is a little tough to classify since it’s technically a HBO movie but is based on the All the Way play about Lyndon B. Johnson, who after the assassination of John F. Kennedy, struggles to pass the Civil Rights Act through a difficult Congress and wants to being to work on ending poverty in America. The HBO film is noteworthy since it has Bryan Cranston reprise his role as LBJ from the 2014 Broadway production that won 2 Tony Awards.

Two big CW releases this week with two of their biggest properties; Supernatural and The Flash!

American Crime Story: The People v. O.J. Simpson – This is the new FX “anthology” series where it will be a new story every season though at this point it’s unclear if its going to be the same cast like others have been. This first season follows the murder trial of O.J. Simpson and has received several different award nominations. Not Rated.

Limitless: Season 1 – This is an exceptionally bad title since there is only one season after Limitless was canceled by CBS. Not Rated.

CSI: Cyber: Season 2 – This is actually titled “CSI: Cyber: The Final Season” but that seems silly when it only lasted for two seasons. The most interesting part about the cancellation of CSI: Cyber is that it offically brought an end to the CSI franchise after 16 years. Not Rated.

Project Itoh: Harmony – The next edition of Project Itoh with Harmony that premiered back in May for a limited run. Harmony is a little strange in that it deals with the “soul” of the human race. In the future where health of the population is valued above all else both in physical and mental health. Since the world government has connected the majority of the world’s citizen’s to a network that tracks all their health, hackers are able to trigger mass suicides around the world. A officer for the World Health Organization tries to track down the culprit, and believes it may be tied to her friend that she thought had died of suicide years earlier.

Fairy Tail: Part 21 – The next set in Fairy Tail with episodes 240 – 252 as Fairy Tail dives right into the middle of the Tartaros arc where the Fairy Tail guild must battle the evil dark guild Tartaros who take out the Magic Council and want to cause a mas magic purge. Fairy Tail must stop them before they can resurrect E.N.D. Not Rated.

High School DxD BorN: Season Three – I still really don’t know much about this series, but here’s a trailer for season 3. Not Rated but heavily adult.

Gundam Build Fighters Try – Another interesting release from Sunrise as they continue to release Gundam in the United States that hasn’t been available before. Gundam Build Fighter Try takes place 7 years since the end of Gundam Build Fighters with the Gunpla Battles taken to the next level. However, the school from the first season, Seiho Academy doesn’t have a team to be able to enter the tournament. A new transfer student named Sekai Kamiki appears and starts to set the world of Gunpla on fire once again. I’m excited because Sekai Kamiki is supposed to be somewhat similar to Domon Kasshu from G Gundam which is corny but one of my favorite Gundam series. Just as it was strange with the previous season, Gundam Build Fighters Try does come with an English dub though it appears to be one done outside the United States (I believe in the Philippines) but I’m more surprised that this is being released with a dub at all that I’m pleased that they have one. I’ve included a Japanese trailer for Gundam Build Fighters Try and if you turn on Closed Captioning it is properly translated. Not Rated.

Yu-Gi-Oh! ARC-V: Season 1, Volume 1 – The newest season of Yu-Gi-Oh! finally comes out on video after it’s been airing on Nicktoons. Though it says Season 1 Volume 1, this still presents a decent value since while English only, it still comes with 24 episodes. Not Rated.

Rin-Ne: Collection 2 – The second half of the first season of Rin-Ne by creator Rumiko Takahashi (not to be confused with season 2 of Rin-Ne called…Rin-Ne 2) about a girl that teams up with a perpetually poor half shinigami classmate to send various spirits to the afterlife. Though almost all of Rumiko Takahashi’s works have been dubbed in English at this point, sadly this set is a sub only set from Sentai Filmworks. Not Rated. 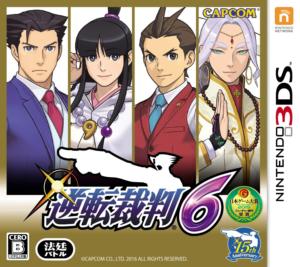 Phoenix Wright: Ace Attorney – Spirit of Justice – Probably one of the biggest releases of the week and a highly anticipated game is apparently download only from Nintendo’s eShop following some of the latest releases that I wasn’t even aware that was the only way to get them. It makes it almost more interesting now since the Ace Attorney anime has been airing and making the series more popular. Spirit of Justice has a courtroom in the Kingdom of Khura’in and features new séance trials plus both Phoenix Wright and Apollo Justice in various locations. Available 3DS only. Rated T for Teen. FOR MURDER.

Here’s a launch trailer for Phoenix Wright: Ace Attorney – Spirit of Justice as well as an 8 minute prologue to the game!