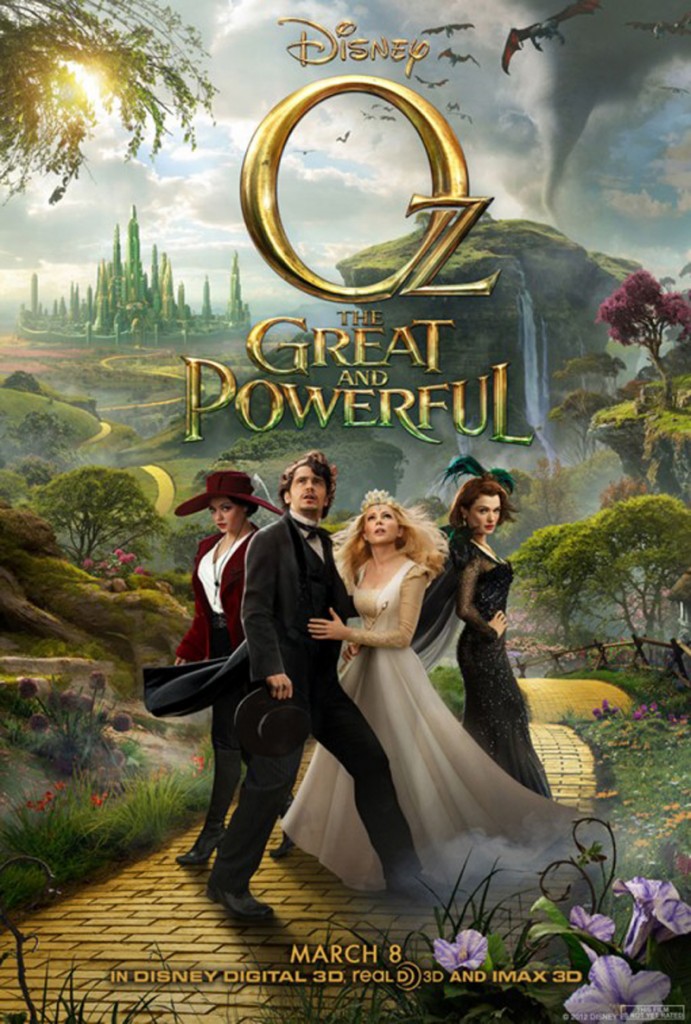 My expectations on this one were a little low. I’m a fan of Sam Raimi’s Spider-Man trilogy, and 2010 Alice in Wonderland’s visual-scapes, and generally love Disney. So when the movie ended I was satisfied.

My Wizard of Oz knowledge is quite limited (I know, how blasphemous!) and I haven’t looked up any back story of how Oz was before he became The Wizard, but I think this film had a good concept going on – con man developing into a lesser con man to help other people.

Is it just me, or does James Franco only know how to play one type of character?

Anyway, the movie starts out with James Franco (Oz) at a traveling carnival (in black and white like the original movie), already being a cheat and con man in his performances and towards his hired help. A storm begins to a brew and Oz escapes in his hot air balloon, only for him to be sucked into it.

He emerges from the tornado into the Technicolor Land of Oz. Once he lands, he runs into Theodora, one of the four witches of Oz and believes Oz to be the wizard that the prophecies speak of to overthrow the Wicked Witch that killed the previous king. Oz doesn’t care much about saving anybody, but perks right up when Theodora mentions he will be a very wealthy king.

To learn more of the prophecy and what he must do, they journey to Emerald City to meet Theodora’s sister, Evanora. Evanora is skeptical of Oz and doesn’t see him as the hero type, but proceeds to tell him how to help their land, anyway. He is told to go to the Dark Forest and break the Wicked Witch’s wand. Turns out, the Wicked Witch is actually Glenda the Good and dawns the exposition hat and tells Oz, and us, that Evanora is the Wicked Witch!

Evanora sees this through her crystal ball and takes matters into her own hand and manipulates Theodora to join her and go against Glinda and Oz and turns her into the green witch everyone knows from the classic film.

Glinda begs for Oz’s help, full knowing he’s only in it for the money (yet has a small glimmer of hope in there somewhere), and it’s a back and forth dance of whether he’ll do it or not, and eventually helps rally her people for battle and banish Evanora and offer Theodora a place among them if the evil from her ever decides to vanish.

Oz becomes King and ends up with Glinda.

It pays homage to the original film several times – the black and white film at the beginning and the aspect ratio change, the scarecrow built by the townspeople as a scare tactic, the lion that is frightened by Oz when he saves Finley the flying monkey, Glinda traveling in bubbles, and the use of of image projector and holographics. I’m sure the movie offended fans of the original and the books, but from my knowledge, I found the movie clever, predictable, but clever.

I jokingly call this movie, The One Where Everyone Wants to Bang James Franco. I don’t find the attraction at all, so it is kind of a bad joke. Not like Dark Shadows where everyone wants Johnny Depp, because THAT makes sense.

Visually, it was gorgeous. The costumes, makeup and effects were nicely done. Zach and I saw it in 3D, and the effects were good, other than I never need to have holographic James Franco that close ever again. Nice, typical Elfman score.

Oz the Great and Powerful was nothing spectacular or groundbreaking, though it did make a pretty penny in the box office. It was certainly entertaining and a decent film for the first quarter of the year.