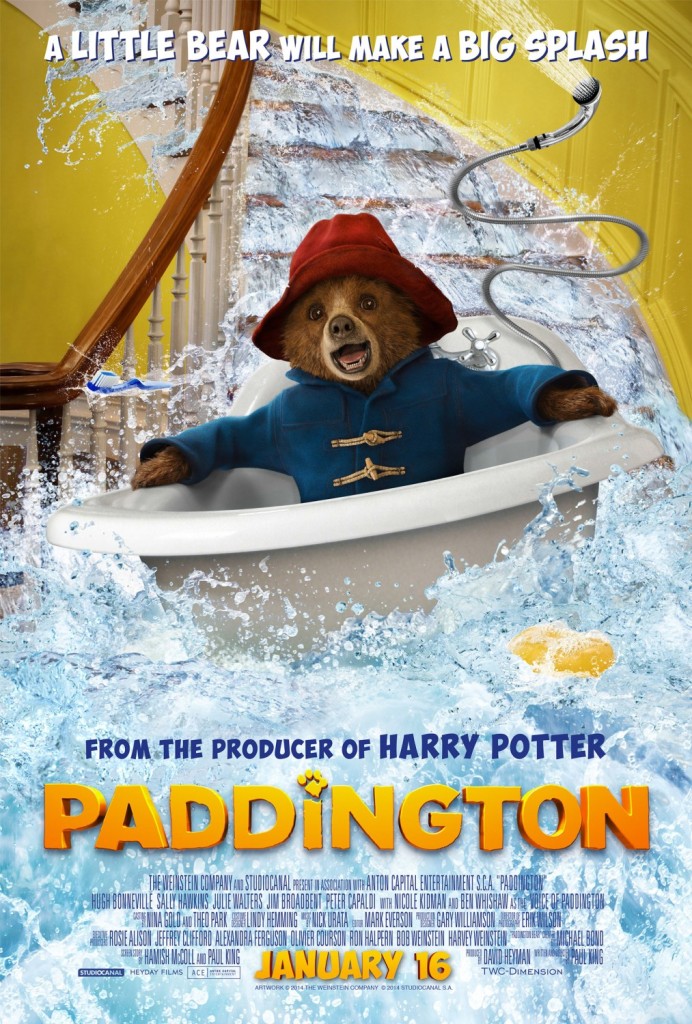 Paddington wasn’t film I had planned on paying to see in the theaters. I don’t have the nostalgic attachment, and honestly the trailers made it seem it was going to be depending on burp and fart jokes for all comedy purposes and be devoid of any enjoyment for an adult. An invite from my BF lead us to the theater and I’m stunned to report that it was simply delightful.

In the deep rainforest of Peru there is a species of semi-intelligent bears that an explorer by the name of Montgomery Clyde discovers. He teaches them how to speak and shares with them stories of his explorations. After a time he has to return back to his home in London, leaving behind his hat and a recipe for marmalade. Years later, the pair of bears that met the explorer have a nephew. One day an Earthquake strikes. The three bears run for shelter, but the uncle gets caught in a fallen tree. Home and family destroyed, Aunt and Nephew head for London. Aunt leaves the young bear (Ben Wishaw) in London to retire in a retirement home for old bears (this is a thing, apparently).

With stories of the kindnesses of humans in mind, the young bear tries to acquaint himself with a human to take him. Understandably so, no one takes him, and somehow doesn’t find a talking bear that strange. Enter the adoptive family of The Browns. Judy Brown (Sally Hawkins) immediately sympathizes and after convincing her husband (Hugh Bonneville), they bring him home for the night, giving him the name of Paddington as that was the station they found him at. To Mr. Brown’s credit, housing a small bear unused to the ways of humans and Londers, accidents do happen. The mishaps make Mr. Brown lose any compassion he barely had. Mrs. Brown promises to take him to the police, but instead takes him to an antique shop that could possibly identify the hat the explorer left behind. The detour is successful and softens Mr. Brown to Paddington’s origin and leads them to the Explorer’s Society to investigate.

A crazy taxidermist (Nicole Kidman) becomes aware of Paddington’s existence and enlists the help of the Brown’s neighbor (Peter Capaldi) to capture and add him to her collection of rare animals. One day Paddington is left alone and the taxidermist tries to kidnap him, resulting in the house kitchen catching on fire and many things throughout the house being ruined. At his wits end, Mr. Brown kicks Paddington out of the house, not wanting to hear his story of what happened. Paddington then takes the leads they found at the Explorer’s Society and goes knocking door to door of each C. Clyde listed.

The last name on his list brings him to the correct home, unfortunately it’s the taxidermist! She is the daughter of the explorer and she has resented the shame her father brought upon the family for not taking in the intelligent bears, thus he was exiled from the society and denied any riches he could have received. She tranquilizes Paddington and starts to prepare for taxidermy.

The Browns are informed by their neighbor that he had been apart of the taxidermist’s plan. The family heads to the museum and after to getting past the security guard, they manage to get in and save Paddington and apprehend the taxidermist and take her to the authorities and she is sentenced to community service at a petting zoo.

Paddington finds a permanent home with The Browns.

I’m glad I was talked into see this. It was cute and heart-warming. There were a lot of really neat visual effects – certain scenes would open up the full house like a dollhouse and we’d see each family member moving. At the antique shop while the owner told a story, the toy train came to life with tiny passengers inside. Not to mention the animation of Paddington himself. Zach and I agreed that the last minute voice change for Paddington was a good one. Nicole Kidman can play a crazy lady quite well, who knew!

it could have benefited from releasing at Christmas time, as well as been marketed better, because like I said at first, the trailers didn’t convince me at all. Fortunately many did take the risk and saw it whether with their children or because they grew up with Paddington and we very well may be seeing a sequel. I’m very pleased with its box office numbers and Rotten Tomatoes ratings! Paddington is definitely a movie I’ll be picking up for my collection and encouraging anyone young and old, children or no children, to watch.