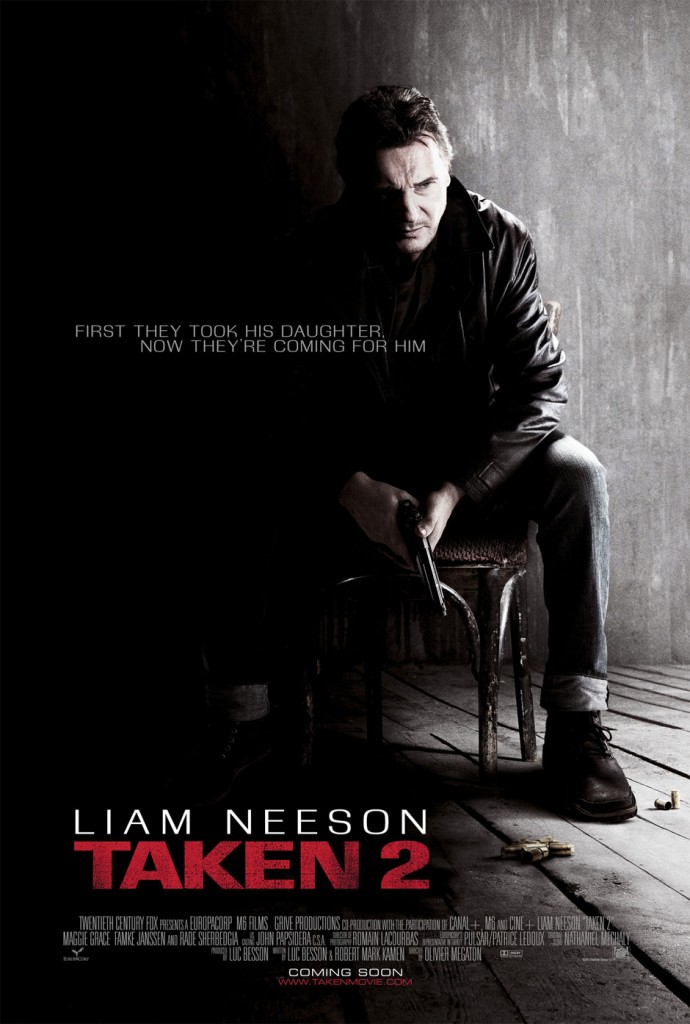 You’d think that after the events of the first Taken, where Liam Neeson’s character kicks everyone’s butt and kills those that stand in the way of him getting his daughter back, people would learn to leave him and his family alone. Apparently the answer is no, since they made a sequel to the movie.

To make a long story short, Bryan (Liam Neeson) takes a business trip to Istanbul, Turkey and invites his ex-wife and daughter to join him because of some family problems of their own. Everything goes well, until the father of the guy who Bryan killed in the first movie decides he wants get revenge on Bryan for killing his son.

Kim (Bryan’s daughter, played by a much older than 16 Maggie Grace) gives her Dad and her Mom time to try to bond again and goes down to the pool. This is when they are both kidnapped and the group is attempting to kidnap Kim. Bryan, with Kim’s help is able to get out but has to leave his ex-wife. Finally after a good car chase scene, Bryan goes after Murad (the previous movie’s killer father.) in order to save his ex-wife.

That’s all I’ll go through right now as I don’t to give EVERYTHING away. But know this, Taken 2 is EXTREMELY similar to the first Taken. This can be either good or bad depending on your feelings on the first one. (Krista hadn’t seen the first one and liked this movie) Somehow Liam Neeson’s family keeps getting put in danger. If they make a sequel they need to not go to a European country and just go to Disney World or something.

My biggest problem with this movie was with Murad (who I kept thinking was the Most Interesting Man in the World but was not). His logic for going after Bryan is loose at best. Stupid at worst. He says because Bryan killed his son, he needs to go after Bryan’s family. Bryan tries to just end it and let them part ways if they let his family go, because he only did what he did to get his daughter back and Murad’s son raped, killed, and sold girls into slavery. If they both let things go, it would be the end of it. However Murad repeatedly was against this saying it doesn’t matter because Bryan killed his son. It didn’t matter what his son did or that he was an evil man. It was really circular logic! And it didn’t mattter that they were both evil, though Murad seemed a little better. Murad just needed to realize that his son was a bad bad man and let things go. It’s what Karma got him for being evil. (The result of his decision looks really weird as Bryan looks to overtake him with just his hand even though that’s not the case.)

Overall I liked this movie, despite it’s flaws. It’s a fun action movie, and Liam Neeson really has had a resurgence of popularity as an action star and it works. I give the movie two and half stars but could be talked into three. The movie doesn’t really offer a lot of substance, but is a fun movie to watch without a lot of problems with it.