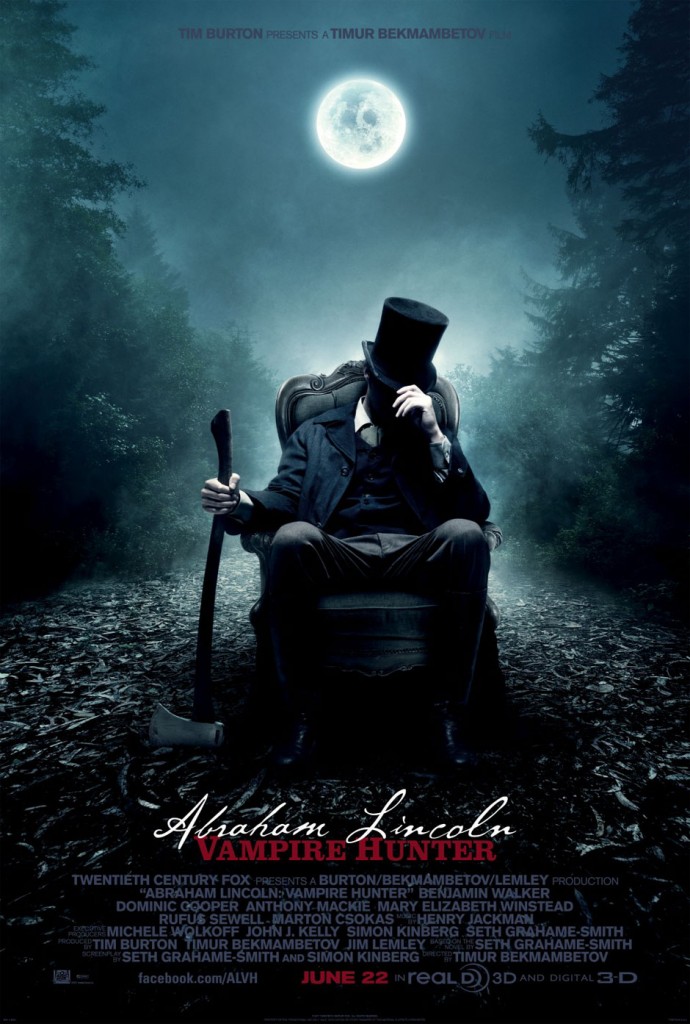 I think the funniest reviews that I’ve seen concerning this movie are the ones that said that this movie took itself too seriously. I humbly submit, WHERE YOU WATCHING THE SAME MOVIE?! Abraham Lincoln: Vampire Hunter did not take itself too seriously. In fact, I think you could argue that the presence of Tim Burton was too strongly felt in this movie (at least considering his recent work). But I’ll get to that in a moment.

First off, Abraham Lincoln: Vampire Hunter the movie is based off of Abraham Lincoln: Vampire Hunter the book. The real pity in all of this is that the author of the book was the screenwriter for this movie. The movie was so stripped down (to random action elements, which I guess is better for the screen) that it took out what I thought were some of the coolest elements of the book, namely some of the politics and vampire back story. Yeah it’s probably not great for an action movie, but it would have made the story less of a gimmick and more of a good story.

The biggest problem is what I think might be the Tim Burton influence. I feel like Tim Burton has almost become a parody of himself and is now influencing others. Many of the scenes became so ridiculous that they detracted from the story if they were trying to be as serious as the book. If they are were trying to be silly then it’s fine. Several of the fight scenes suffered from this. A random fight scene with the vampire that killed Abraham Lincoln’s mother becomes a fight with a wild horse stampede, where eventually the vampire throws a horse at Abe, who then picks it up and starts to ride on it! The scene on the train is largely reminiscent of this type of crazy. All of the fight scenes suffered from a cheap trick to keep things cheap (while still being expensive?) by having EVERY FIGHT SCENE with ridiculous amount of fog or dust flying. I’m not sure if it was meant to keep everyone on their toes and surprised or just to film less. I think Tim Burton had too much influence, and even most Tim Burton movies need to stop for a little while.

The biggest shame is that Benjamin Walker did a great job as Abraham Lincoln and I would really like to see him try to play a normal Abe. Mary Winstead (from Scott Pilgrim and Sky High) also did a great job in the movie as Mary Lincoln. But they couldn’t rescue all the problems with the script. The movie tried to portray itself (as with the book, and the book is WAY more successful at it.) as a untold history of Abraham Lincoln, but missed several details. One of the biggest, is that the movie tried to make it seem like the Lincoln’s only had one son. THEY HAD FOUR. You don’t just magically change the number to suit the plot, and if you do, make a good reason for it. They did not have that reason.

Overall the movie is fun if you’re willing to take it as it’s own thing, with only a vague knowledge of the book or if you wanted to get together with friend and riff on it. As a serious movie though, it’s a big disappointment. I give it a 2 out of 5.