Well this movie has been a long time coming. I admit I almost thought that the movie would never happen. It’s been teased to the audience since Iron Man in 2008. I think Marvel was brilliant by linking all the movies together since then, pointing towards The Avengers. But it was dangerous, long game. If one of the movies flopped, The Avengers might never have been made. However, each one was great and continued to show that comic book based movies can be excellent.

And boy did Marvel succeed. The build up worked. They picked a great nerdy director, Joss Whedon, to make it and he used his talents to bless the movie. He was able to balance out all the heroes, have a good interesting storyline, have humor, drama, action, and everything in between.

The movie is about the cube from Captain America called the Tesseract. S.H.I.E.L.D. has been testing it, but the outcast God Loki with some help of aliens is out to use it for himself. He invades a S.H.I.E.L.D. base and sets in motion events that lead up to Captain America, Iron Man, The Hulk, Thor, Black Widow, and Hawkeye all joining together to stop Loki and his invasion plans.

All this being said, The Avengers may not be the a perfect movie, but it is the best movie. It has some flaws, but nothing that really detracts from the movie. The Avengers is the type of movie that is completely an escape. It’s fun and just whenever you think that things are starting to slowdown, Joss Whedon brings in something that does something to bring up the energy again.

The Avengers also was perfect in the way that it handled all of the superheroes. They balanced out everyone’s screen time, gave everyone moments to shine and even had battles between characters. When they first announced Mark Ruffalo as the new Hulk, I had my doubts. However, I think he was the perfect actor as the Hulk to work as a team player. Edward Norton, I don’t think would have had the good team dynamic that Mark gave. In addition, Mark did the motion capture for his alter ego and did a great job. I can’t wait to see him do more with Bruce Banner.

Finally, if you hadn’t paid attention to anything I’ve said previously or the other reviews about The Avengers, know this. THERE ARE TWO DIFFERENT THINGS IN THE CREDITS. You need to stay for both. Don’t be in such a hurry to leave, but if you’ve seen any Marvel movie, you should know this by now. The first of the after credits scene already sets things up for the next round of Avengers movies and should have a good pay off, especially if they get Joss Whedon to do the whole thing again. I’m not sure that this movie could have ever worked if it weren’t for him.

This movie is one that lives up to the hype and I can’t praise it enough. I hope that this daring move my Marvel continues and that other movie studios will start to think long-term, not these quick movies that have little substance. This could potentially change movie making more than Avatar ever could, and this I am excited for. At the very least, comic book movies have a new standard that they need to aim for.

Also I won’t ruin things in the movie, but I will leave this here as my tribute. 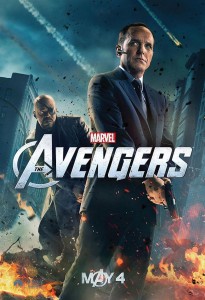