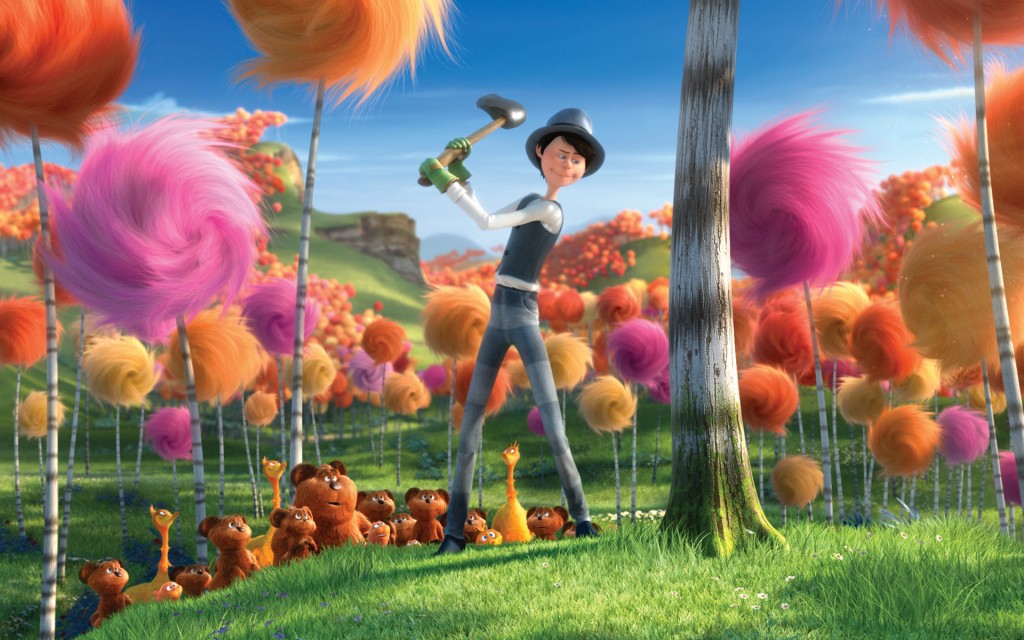 The Lorax (The film) is really nothing like the Trailer (above) and the marketing for it was a little skewed. This seem to be a recent trend but in this case didn’t matter as much as the movie has still done quite well in theaters so far.

The above trailer makes the movie almost look hipster looking with more of a love story then the story of the Lorax. The music certainly doesn’t help. (Which is never in the film at all.) This other trailer is a little bit better a showing what the movie is really about.

Both these trailers however miss something very important, that at least I think is important. This movie has Musical Numbers. Almost from the beginning, they start with a song about Thneedville and how it is artificial. Some of these musical numbers are rather fun, and not one of the ads I had seen before the film had any mention of the music.

The movie can be broken into two different parts. One is the story of Ted, who goes to visit the Once-ler because the girl that he likes, Audrey, wants to bring trees to the completely plastic town of Thneedville. As he visits the Once-ler, Ted is confronted by Mr. O’hare who wants to stop him from bringing trees back to the town (and has a whole spy network to prevent it).

The second part of the movie centers around the Once-ler, his quest to make and sell his Thneed, and the Lorax. This is the tale that most people are familiar with. However it has been extended for time and clarity. This seems to be a lot of where people dislike the changes.

The Lorax was done by Illumination Entertainment, the studio that made Despicable Me and written by the duo that previous wrote Horton Hears a Who!. The movie is quite a bit different than the original book and the television special, but it does keep a lot of the same events. There is some controversy surrounding the movie from multiple directions.

First, there are those who argue its too heavy on the environmentalism (Even going so far, to use Tree D instead of 3D for marketing.) I challenge that the original book and the TV special were exactly the same so the intent is still the same. If you don’t like it, then don’t go to it. That being said, I think that the movie is not heavy handed in it and still really fun to watch.

The second argument is that it includes more than the original book, with the addition of Ted and the town of Thneedville as well as the additional background on the Once-ler. I thought it was going to be a problem, especially considering the trailers, but I found that the movie balanced both stories very well, and showed the consequences of what the Once-ler started and his redemption.

The Lorax is very funny. The music helps to balance things out and even make certain points in the movie, even being more hilarious then the rest of the movie. There is even quite a bit of funny action that you don’t get from the trailers that make the movie very fun. All in all, I think this was an excellent family film that is fun to watch. If you liked Horton Hears a Who! you most likely will enjoy this movie as well.